Holy Light Country is the country of the series Maou-sama, Retry!.

In the past the three angels Cherub, Throne and Seraph fought the demons and their king Greol, the angels came out victorious, but the sacrifice of the angels was great. The Cherub vanished after sealing the Devil King. Throne devoted himself to fulfilling people's desires, but after years of fulfilling wicked desires he became corrupted, becoming a demonic statue, and the state of Seraph remains unknown.

The descendants of the people that fought against the Devil King together with the Cherub became nobles, and they are now standing at the top of the general populace, enjoying a life of luxury.

Thanks to the religion that worships the Cherub, the country is united as one, but the inside has an incredibly high amount of confrontations. There’s people shouting about removing the noble system, and there’s also others that have fallen into despair towards this society and finally join the side of worshipping the Devils.

The Holy Light Country is the country where the three Holy Maidens are the ones standing at the top. Below them there’s the Holy Church and the Holy Knight Order, but they are lined up at the same standing, and against foreign enemies, they would stand together to protect the country.

Of course, they both have strict exams, and it is necessary to pass them, but even with that, they don’t close their doors to many kind of people. This could be said to be a rare case from the many countries.

But lately the rise of the nobles has gotten more remarkable, and the enclosure of the Holy Knight Order was proceeding. At times land, fame, money; flickering a variety of things, they would bring the knights in as proteges. That’s because the selection of a Holy Maiden weighs heavily on the Holy Knight Order’s opinion as well.

On the other hand, it is difficult to bribe the people of the Church. Not only do they have talent for magic, they serve the Angel-samas which is something that must be heavily considered, so they are expected to have severe amounts of honesty. Bribing them and bringing them to their side was impossible even for nobles. Therefore, they set their aims for the Holy Knight Order, and they would select the Holy Maidens they found most convenient for them, and over a long time, they are now slowly eating into the sacred precincts.

And so, in the present…they have succeeded in selecting what could be said to be the ideal Holy Maidens. The tops of the country not having interest in politics or money at all was ideal.

They are the center of worship of the people, representing the angels.

In this country, the economy and worth of the money drastically differs between locations. In the village of Aku, a copper and a big copper was enough to live with. The grassy villages barter often as well, so it is hard to judge the worth of the money there.

Commercial and agricultural, with the desert climate, he has to import a lot of food from abroad, mainly from his less hostile Tsardom of Light Neighbor.

The government is focused on benefiting the rich and Nobles. The misery of the poor is ignored by the elites of the country which creates a situation of extreme poverty alongside grand ostentations and luxurious mansions.

This situation generated a group of self-styled radicals called Satanists. He seeks to overthrow the government and recreate the country.

One of the policies that set Holy Light Country apart from other countries is its abomination to slavery, even nobles would not be forgiven if they have a slave. 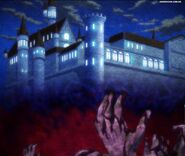 Village Bunnies (managed by Kunai)
Add a photo to this gallery
Retrieved from "https://demon-lord-retry.fandom.com/wiki/Holy_Light_Country?oldid=3782"
Community content is available under CC-BY-SA unless otherwise noted.